A Skills Act for Vet project meeting was held on March 30th, 2020. The meeting, which had previously been planned in Bologna, was held online due to the coronavirus lockdown. The main aim was the analysis of the results of the survey created by Elidea, which involved students, teachers and various companies.

The primary purpose of this survey was to determine which soft skills are most important in internships. So far, 705 students, 226 teachers and 70 companies have responded to the questionnaires.

The students who took part in the survey are from more than ten different EU countries and are 16 to 19 years old. Most of them come from Italy (24%), Bulgaria (33.6%) Poland (27.37%) and have carried out at least one internship. Most of the internship are three or four weeks long and the main sectors involved are information technology, tourism and gastronomy. The favourite destinations are Spain followed by Italy and Germany. 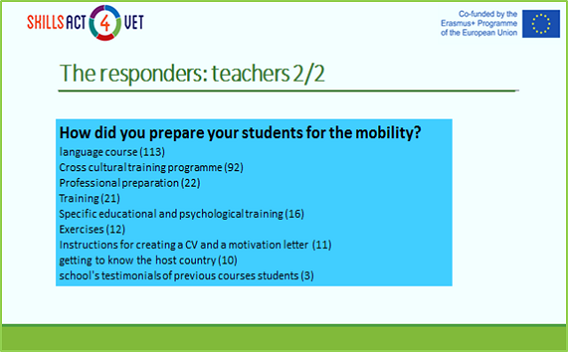 As for the teachers, they are from different EU countries, but mainly from Italy (29%), Poland (26%) and Bulgaria (34%). According to the teachers the most important students’ preparation for mobility is language courses, but cross cultural training is also critical. 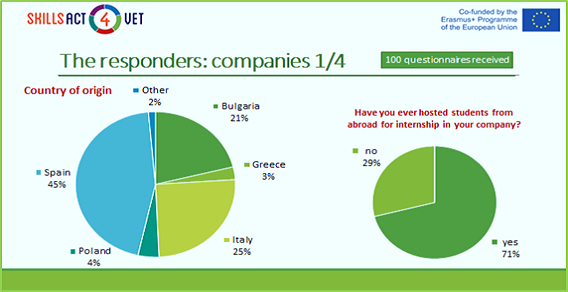 As for the companies, 45% of them are Spanish, 25% Italian, 21% Bulgarian, while the remaining are from other EU countries. 71% of the companies hosted internships at least once. The majority of the companies involved, are in these sectors: tourism, gastronomy and education sectors; the others are related to the IT, advertising, economics, mechanics, electronics, publishing, gardening and agriculture sectors. In most of the companies the internship lasted three or four weeks.

The main difficulties faced on stage: knowledge of the language

Students as well as teachers and companies consider internship an extremely positive experience, nevertheless they believe there are some difficulties in carrying it out. The main difficulty concerns communication in the language of the country hosting internship, this difficulty is at the top students’, teachers’ and companies’ ranking. Cultural differences are the second main obstacle according to teachers and companies, while students put it third after homesickness.

Skills gained from internships according to students, teachers and companies

According to the students internship is first of all a good chance to improve a foreign language, second to become more autonomous and third to learn to work in a team.

The Teachers, on the other hand, believe that internship first increases students’ self-awareness, second improves their sensitivity towards different cultures and third fosters their sense of initiative.

Finally the companies think that internship first improves students’ ability to work in a team, second gives them an important experience of the workplace.

It is interesting to notice that students and companies, unlike teachers, have the same idea about the most important soft skills. Both of them consider self-confidence, i.e. a strong knowledge of one’s own strengths and weaknesses, the most important skill, while teachers believe it is the ability to manage one’s emotions.

According to students and companies the second most important skill is “followership”, i.e. the ability to support one’s chiefs and colleagues and to work in a team trusting one other. According to the teachers, this skill is less important than cultural awareness of the context.

Finally proactivity is considered very important by companies, but not so important by students and teachers. Proactivity means taking action by causing change and not only reacting to change when it happens.

The results of the questionnaire show that the five main difficulties that students face during internships are:

1) difficulties in the language of the country hosting the internship;

2) difficulties in communicating in a different cultural context;

3) emotional / psychological difficulties such as homesickness;

4) difficulties in carrying out some practical activities in the internship workplace;

5) difficulties connected to the different organization of the working times in the country hosting the students.

As to the most important soft skills, according to the results of the questionnaire the top five are:

1) CONTEXT READING and ADAPTABILITY : It is the ability to act properly in both new and known contexts, adapting to their specific characteristics and recognizing the values, beliefs, resources and limits of the environment and people. It is also the ability to recognize one’s own and others’ role expectations. In multicultural contexts, this capacity implies the linguistic-communicative adaptation to specific environment;

3) FOLLOWERSHIP: Supporting ones own referent/superior and co-workers at the workplace and showing collaboration, trust in the group’s members and cohesion capabilities;

4) CULTURAL AWARENESS : Respecting and being aware of cultural differences and working effectively with people from a range of social and cultural backgrounds;

5) PROACTIVITY: Acting in advance of a future situation, rather than just reacting to it.